The Etosha National Park is the main attraction of Namibia, with a quarter of a million visitors annually. The best time regarding the weather is the colder and dry season from May to September. The dry season is also the busiest time of the year, and reservations have to be made an entire year in advance.

Friends of mine visited Namibia at the end of the rainy season. The pro; it wasn’t busy with lush vegetation. Four of the Big 5 exist in Etosha. Lions, elephants, and rhinos are frequently spotted, leopards are hiding pretty often, and buffalos don't occur. However, therefore you may spot the elusive black rhino. IMO the best place in the world for it. The dry season is outstanding for wildlife watching and photography because of the dry bush and the low grass. The visibility of game and predators is terrific. Decreasing rainfall in April but still hot around 30°C/86°F. April is a transient month, therefore, less busy. May gets a little cooler below 30°C/86°F. June to August are the dry winter months. During the day, especially in the afternoon, temps are pleasant, around 25°C/77°F.

It is cold at night, and during the morning game drives, temps are below 10°C/50°F. Animals are easy to spot gathering at the waterholes. At the end of the dry season in September and October, the game is weaker and easy prey for lions, cheetahs, and hyenas. Already increasing temperatures in September above 30°C/86°F. However, early morning drives are still pleasant, with temps below 20°C/68°F. The dry season is also the peak season, crowded, and pricy. Early accommodation bookings are advised. Increasing rainfall in November and December but usually worth a visit. Most rainfall from January to March, usually in the afternoon often accompanied by thunderstorms. However, my friends visited Etosha in March, and it was quite ok not crowded, and lodges were cheaper.

They took stunning pictures of the cloudy sky, but they told me it was hot; some days topped 35°C/95°F. The rainy season can be a little tricky. Flooded roads occur, and more driving necessary to spot wildlife since the game isn't concentrated at the waterholes. However, everything is turned into a lush green paradise. Mosquitos are an issue during this time of the year. The dry saline pans are most of the time a desert. The pans get occasionally flooded in very wet years by several rivers. The Etosha pan becomes a shallow lake of roughly 20cm in height. During these exceptional occasions, flamingos and pelicans breed at the Etosha Pan. Usually, the rainy season is an excellent time for bird watching with residents and migratory (one third) birds alike. As you can see, lots of these pictures were taken during the rainy season. It is hot, there can be torrential rain, but this season has some advantages as well. If you can adjust to heat, think about November, December, mid to end of March, or April. Many grazers like zebras and antelopes start calving because of the huge food availability. The game conditions are getting better at the beginning of the rainy season.

Sunrise is between 6 and 7 am - Sunset before 8 pm. Sunrise and Sunset times
Gate opening hours depending on sunrise and sunset. The gates and also the camp gates are open from sunrise until sunset. You have to leave Etosha in time or be in your camp at sunset, otherwise, you risk a fine. The reason for the closure at night is to avoid accidents with the wildlife. Malaria isn't a big issue in Namibia except for the Caprivi part of the Okavango Delta in the northeast. In general, the risk is the highest during the rainy season and at the beginning of the dry season roundabout until June. It is recommended to wear long sleeves, long trousers to keep mosquitoes at bay. Ask your doctor if it is advisable to take antimalarial in the high-risk time or even in the dry season. What we always do is travelling with a stand-by medication in our luggage.

Namibia is a “Young Nation” that gained independence from South Africa in 1990. Before, it was named  German South-West Africa, and it was a German colony until 1920.

Etosha is located in the north of Namibia, 5 hours drive from Windhoek. It got the National Park status already in 1967. Etosha means “great white place” in the language of the Ovambo tribe. The Etosha Salt Pan has almost a quarter of the National Park’s size. This salt pan is a vast breeding ground for more than one million flamingos during the rainy season. What happens in the rainy season the "great white place" becomes a great pink place.

Self-driving safaris are one of the highlights in the park. Explore Etosha on more than 3.550 km of gravel roads. 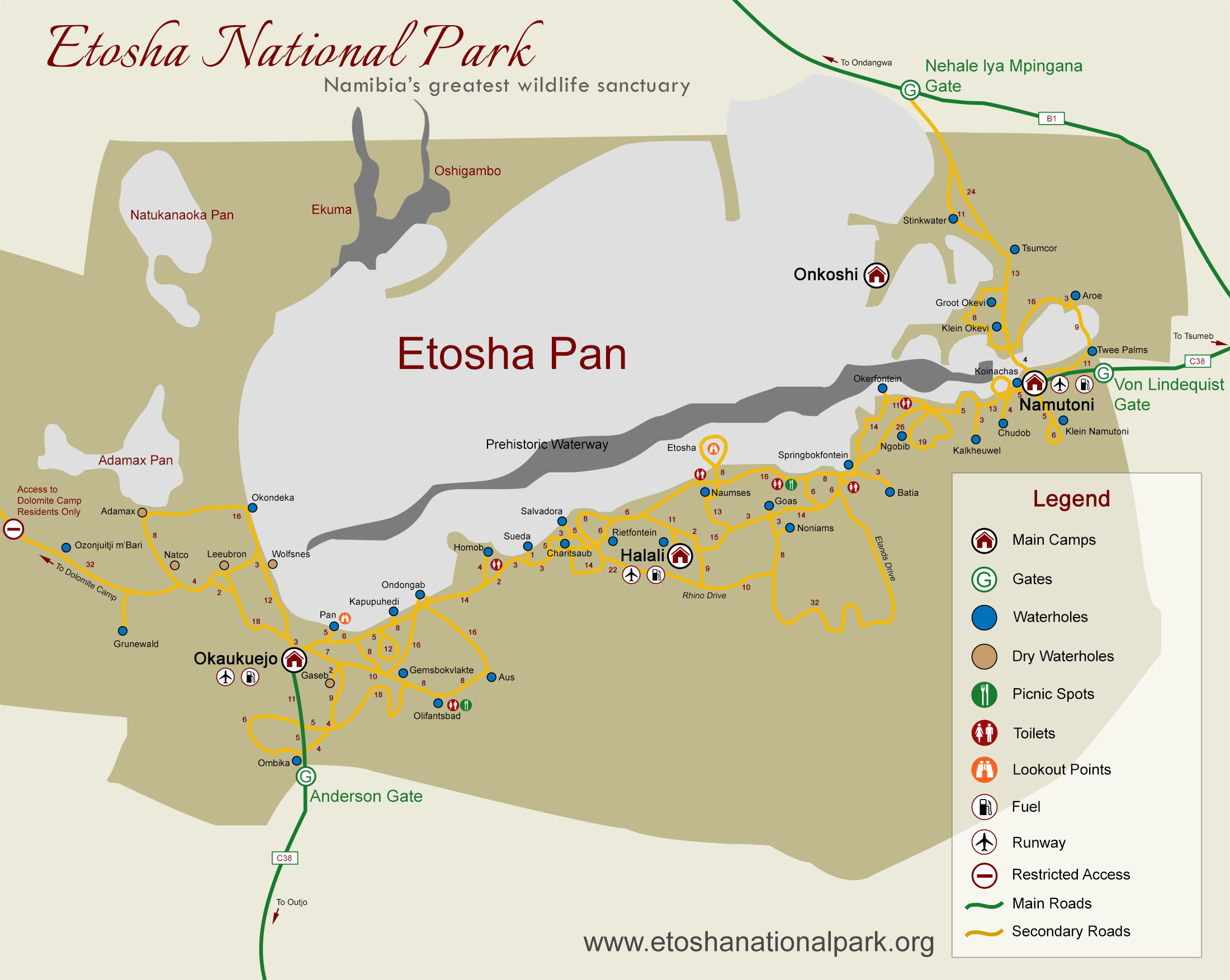 Black rhinos at Okaukuejo Waterhole in the night

There are four gates to access Etosha. The waterholes are natural sources while others are human-made. Tips for Your Self-Guided Safari

I can't say Etosha or Kruger are the better park to visit. The vegetation is different, the carnivore density, and also the number of visitors each year. In the end, it depends on what else you would like to experience in Africa. I want to give you an idea of both parks with the followed facts:

Do you like to know more about Kruger? Read on my Kruger National Park Guide included a game viewing calendar.

Facts of the Etosha Elephants

I recommend combining Etosha with Caprivi Strip, the Okavango Delta and Chobe in Botswana and also the Vic Falls in Zimbabwe. It is all located in the east and easy to access by rental jeep. Getting to Victoria Falls only is best by plane. The falls are located 1000 km to the east.

Thanks for these outstanding pictures from the dry season taken by my friend and photographer Chris. The photos from the rainy season were provided by my wonderful friends Umamisky from Switzerland. 493 km
Sossusvlei Namibia
These are the highest dunes in the world. From the entrance of the park, it is… 726 km
Take a Mokoro in the Okavango Delta
Botswana is famous for self-driving safaris and guided tours as well. We always… 858 km
Chobe National Park in Botswana
Chobe is the elephant kingdom. The elephant population is estimated at 50.000.…