Swim With Manatees in Florida

During wintertime, the manatees migrate to Crystal River, Florida, because they get stressed by the cold gulf if the temperature goes below 68°F / 20°C. However, they look like to be prepared for cold temperatures. Their bodies do not have much fat for insulation. The estimated population around the Florida coast is 7.500-10.000 manatees.

The reason that they gather around the springs: the springs have a constant temp of 74°F/23°C. During high tide, they move to the Three Sisters Springs, and at low tide, they gather outside in the channel at Idiot’s Delight I and II.

The best months for swimming with manatees in Florida are from mid-November to late March. They gather in huge numbers at the springs only in the wintertime.

They migrate to the springs when the sea temperature is too cold for them. The springs have a constant temperature of 20°C/68°F, which they need to survive. 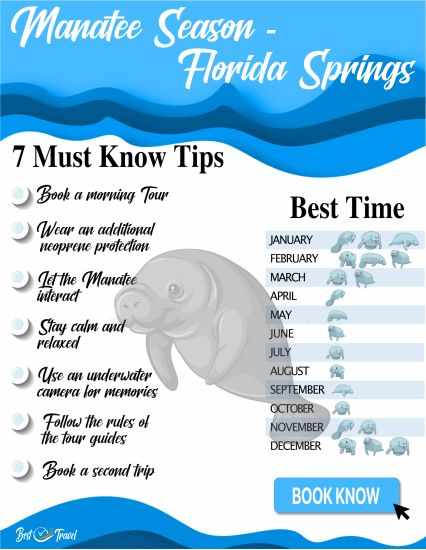 While manatees can be found in large numbers from mid-November until mid-March, exceptions are possible. In 2018, for example, they already left the springs in mid-February due to an unusually high day temperature. On the other hand, in one year, they stayed until April, even early May.

To be on the safe side, stick to the months mentioned above. It is an unforgettable experience when a manatee comes close and gives you a kiss or even hugs you. That was incredible.

This is the time to spot Manatees and swim with them. The total population in Crystal River can reach up to 800 manatees in the winter. That's why so many visitors come in the winter months. Be prepared to compete with the best tour spots with hundreds of others. That's why it's essential to book in advance. If they are fully booked, no chance of getting on a tour.

I was wondering who was hugging me and trying to take me on a dive. I was glad to have the aqua noddle from the tour company.

However, the most important is that the manatees don't get disturbed by these tours. Groups are small and spread throughout the day. From my own experience, the manatees love the interactions with the snorkelers as long as they stay calm - no hectic movements. I got hugged and kissed by different manatees.

As they migrated to the ocean, you won't see large numbers of Manatees in Florida from spring until fall. That's why the manatee population ranges between 60-90 only in the Crystal River area outside of the winter months. That also means there are still some manatee residents, and there is a chance that you might spot one or two. It's still a nice overall experience as it's much quieter, with very few other visitors. Now you are allowed to swim by yourself at Chrystal River Springs.

It is almost impossible to avoid crowds while swimming with the manatees. Even in the early morning, expect 30 to 40 people in the water. However, the Three Sisters Springs are tranquil when they open the gate early in the morning, and the manatees are most active during that time of day. That means early morning bookings are necessary for the best experience, regardless of other visitors.

Do you just want to spot the manatees without swimming? Also, get there early in the morning, as this is the time when the manatees are active. During the day and in the afternoon, they rest and gather together.

However, it is impressive when hundreds of manatees stick together at the springs and in the small channels. The views from the boardwalk into the springs and the channel are fantastic.

The manatee peak season can be pretty chilly in the morning. On average, it's roughly 50°F/10°C cold in the early morning. We experienced 28°F/-2°C, which does not happen often. It was pretty cold when we got out of the water. Day temps are usually between 58°F/15°C and 70°F/21°C. Precipitation occurs year-round, with its peak in the summer months. It’s quite hot and muggy in the summer. The temperatures are around 90°F/32°C, and mosquitos can be an issue.

How Long to Stay

Regardless if you plan to swim with manatees or just want to spot them, I highly recommend staying here for a couple of days. Visit the Three Sisters Spring, have a look at one of the many other springs like the Rainbow Springs and enjoy the manatee encounter. Actually, we planned camping in the Rainbow Springs State Park. Due to the cold night temps of 32°F, we booked a room at the Hampton Inn Crystal River instead last minute. It was just a 5 minutes drive to our manatee tour the next morning. We loved the great breakfast each day.

Many years ago, I saw a picture with hundreds of manatees close together. When we decided to leave our jobs to explore a little bit of our wonderful earth, I knew it was time to watch these fascinating animals related to elephants. It is usually guaranteed to watch them during winter at Crystal River National Wildlife Refuge, established in 1983 to protect the West Indian Manatees.

This refuge preserves the last undeveloped habitat in Kings Bay. Kings Spring is the largest natural spring in the bay and the primary source of the Crystal River. The spring is located in Citrus County, which is quite busy during the wintertime due to the vast number of manatees in King’s Bay.

It’s the largest gathering of manatees in the world during the winter months. Everybody wants to get nose to nose with a manatee. You definitely spot them in high numbers inside and outside of the springs.

The manatees spend the majority of their time resting around the springs. They are motionless while resting during the day.

It's the perfect location to observe manatees along the boardwalk. Volunteers answer all questions and offer guided walking and birding trails. Birding is outstanding around the springs, so we came here for a second visit.

Swimming and kayaking are allowed during the summer. Nevertheless, there isn’t any access through the refuge. You'd have to come by boat or kayak to get into it. You may spot a manatee, but there are very few around in summer.

If you don’t like to swim in the river in winter, you can go on a kayak tour to get a closer look. There are plenty of tour operators around Crystal River to swim or kayak with the manatees and dive into the cavern at Kings Spring. However, you can also spot them in huge numbers already from the boardwalk of the Three Sisters Spring.

7 Must-Know Tips to Swim With Manatees

The Uncertain Future of the Manatees

These amazing giants don’t have any natural enemies, but humans cause the biggest threats. The year 2021 was the worst ever for the manatee population in Florida. I assume you heard the news of starving and dying manatees along the coasts and in the Florida channels. The sad record of 2020 doubled, meaning more than one thousand manatees died in 2021. They depend on seagrass but can't find enough any longer. Nutrition pollution causes algae blooms, the reason for the disappeared seagrass. There are many efforts for the replantation of seagrass and better wastewater management. I hope the winter won't be too hard and stressful for them to cause even more deaths.

In December 2021, US wildlife agencies announced to start an experimental feeding program. An estimated 90% of the seagrass in the Indian River Lagoon disappeared. Another experiment is to regrow the needed seagrass for the sea cows.

Are you wondering about the different water quality of my pictures? We went on two separate tours to other springs. One spring was the main at Three Sisters with lots of activities by a huge number of manatees, the reason for the poor visibility. However, here we spotted the biggest of it all. We went to a smaller spring on the other tour with fewer manatees and younger ones; therefore, we had better visibility in the water.

Please get in touch with me if you wish to use any of my photos, but I will take action against picture theft. 702 km
Cayo Jutias
Most beautiful Island that we've ever seen. We took a cheap tour from Vinales…

703 km
Valle Ancon - Vinales
Valle Vinales once covered by a mountain limestone range, but today much has… 707 km
Vinales - All About Tobacco Plantations in Cuba
Vinales is a must to see where real Cuban cigars come from. But Vinales is more… 747 km
Birding at Zapata, Playa Larga
Birding at National Park Zapata is outstanding. We did this guided tour twice…