Although afternoon may give you the perfect light for Fisgard Lighthouse, you need to consider the opening hours. The Lighthouse is located on the same premise as Ford Rodd Hill, which is open all day from mid-March to mid-October. The surroundings can be visited each day during the opening hours.

If you arrive too late, you may drive to Esquimalt Lagoon. The view from there is not bad towards Fisgard, but you may need a good camera zoom for a good shot.

Victoria has mild winters and receives the lowest annual rainfall on the west coast. Although winters are mild, you can expect a certain amount of rain and fog. Summer temperature could reach up to 30°C, and it's the driest season. Because of the sub-Mediterranean climate, Victoria is sometimes named "The Garden City". You could find even rare plants in Canada like palms and eucalyptus. In general, the city enjoys plenty of sunshine throughout the year.

Almost a century after the light was turned on at Fisgard in 1860 the site was named a National historic site. Fisgard is still in operation although the last Lighthouse keeper left the station in 1929 as it became automated. It was built in 1860 to guide vessels through the entrance of Esquimalt harbour. It was named after HMS Fisgard, a British Navy ship that spent time in the Pacific. Fisgard was the first Lighthouse build on the Canadian west coast shortly followed by the Race Rocks Lighthouse nearby in Juan de Fuca's Strait. At this time, Vancouver Island was a British crown colony and not part of Canada. Together they mark the save anchorage of Royal Roads and point the way to Victoria harbour for merchant ships and recreational vessels.

During the opening hours, you can visit the inside of the building containing two floors of exhibits, dealing with shipwrecks, storms, far-flung lights, and the light keeper's everyday working equipment a century ago. The lightkeeper had an important job. Every day at sunset, he or his assistant climbed the 51 steps to the small octagonal lamp room. In the early days, the lit an oil lamp which had to be serviced all night long. Therefore they climbed the stairs often during their 4 hours shift to trim the wick to avoid any smoke which may dim the lamp's beam. During stormy nights, they may even have to stay in the tiny lamp room to wipe away condensation or even walk outside to brush away snow during wintertime. The staircase at Fisgard was unique at the time the lighthouse was built. It was made of steel instead of wood like in many other buildings. Although you cannot climb the staircase today, you can look upwards through the lightweights constructed green stairs. In the early 1940s, the acetylene lamp was replaced by a battery-powered electric light. In 1958 power lines from Fort Rodd Hill could bring a constant electric light to the tower.

You access Fisgard Lighthouse through Fort Rodd Hill, a coast artillery fort overlooking Esquimalt Harbour's entrance, built after the lighthouse in the late 1890s to protect Victoria and the Royal Naval base. If you plan to visit the lighthouse and are interested in historic military buildings, you may spend a half-day at the Fort. There are plenty of different buildings to visit, including the Belmont Battery and the Upper Battery.

Where to Stay Inside the Park

If you like to spend more time at this historical place you can book an oTENTik tent near the Lower Battery from mid-May to end of September. You only need to bring your sleeping back and your camera. Reservation oTENTik

What Else to Discover

Although there is a direct path from Ford Rodd Hill to the lighthouse, you can take the nature path, near the picnic tables, for a short walk through a forest, with many sights and bird sounds along the way.  As you walk along the trails, you may see some of the year-round residents, including Colombian Black-tailed deer, grey squirrels, raccoons and numerous bird species. The waters around Fisgard Lighthouse are frequented by harbour seals and the occasional sea lion. Close to the Lighthouse you may spot some Oyster Catchers seeking for food. 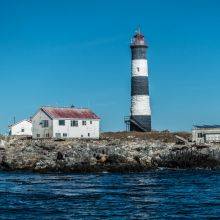 362 km
Pulteney Lighthouse
The lighthouse is located in the most western part of the island. You can reach… 613 km
Moraine Lake to Consolation Lakes - Banff
Banff National Park is an outstanding place of truly beautiful nature. It is…