The penguins at St Kilda pier are present year-round. St. Kilda is a suburb south of the city centre of Melbourne in Victoria. Most of the little blue or fairy penguins come from the sea after sunset. It's an awesome experience to watch the smallest penguin of all waddle in throughout the evening after their hunt for fish at sea. It is cute how they walk and jump to their burrows between the rocks and make noise. To spot as many as possible, you need to visit at the right time of day and during the right season. Thanks to my Melburnian friend Rik, I already spotted them a couple of times. He always gives me tons of tips and advice—the reason I had to write this article. I want you to get the same insights for an unforgettable experience.

The best times to watch penguins in this unique onshore colony is during the main breeding and feeding season and the moulting season from October to April. Google Maps location entrance gate to the penguin pier.

Time of Day | When to See the Penguins Every day after sunset, the penguins come ashore from the sea to their nests at St Kilda Breakwater. You can spot them waddling to their rock homes after sunset. 9-12 hours later, they get back to the sea before sunrise. The pier is open 24 hours. To spot them, be there any time after sunset. Check sunset (and sunrise times) here: Sunrise/Sunset Melbourne (select the month and then press 'Go').

The best daytime after sundown in terms of sightings is usually about 30 minutes after sunset. However, keep in mind that it gets crowded around sunset as everyone wants to see these cute guys.

My tips for a memorable visit:

The St. Kilda Penguin colony is temporarily closed. The good news is it will be opened again. They construct an entirely new viewing area. The repair works at the St.Kilda Pier will last until 2024 and it looks like they won't open the viewing area before. Since spring 2021 there are building works going on at St. Kilda Beach to upgrade the old storm drain and extend the pier for about 450 meters. The new platform will lead above the sea so that you can watch the penguins arriving from the sea and waddling to their burrows. Penguins got disturbed and even harmed for years the reason the burrows - the huge rocks which you see in my pictures are no longer accessible. Do you like to know how it'll look in the future? Attached is a picture from my friend Rik who is living around the corner. And here is a new picture from Rik of what the construction area looks like and how close you get to the pier this May 2022.

It is unbelievable, but a penguin got attacked, thrown against a wall and killed by a group of young men at 2 am at night on October 27 in 2021. This is heartbreaking to kill one of those vulnerable birds. Check out my article constantly to stay informed.

My Top Tour Tips for Melbourne

Melbourne is a fascinating city the second most popular one in Australia and worth spending a couple of days in. I like the vibrant city life, the parks, and the lovely residents.

Penguins at St Kilda can be spotted throughout the year. However, there are significantly fewer penguins in the late spring and winter months of May, June and July. As soon as the weather gets colder in May/June, they are off on their winter jaunt. Most of the penguins are out at sea for a few weeks, feeding up with fish, and getting ready for breeding later. Depending on various factors, the colony at St Kilda starts to grow each year again in August/September. Usually, you can spot plenty of penguins between October/November until March/April. Depending on the month, they build nests, lay eggs, and raise chicks or moulting (see below). During the moulting period, usually in January/February, you'll also spot slightly fewer penguins. They are out in the sea to gain weight for weeks. During the moulting season, penguins can't swim and stay on land. If you are interested in seeing the little ones: The peak number of chicks is in November and December.

My 3 Tips for Melbourne

Staying at a nearby hotel also means you avoid the traffic, which is horrible during rush hour. Parking fees around are pretty high.

My Top Tip to Stay in the Heart of Melbourne Quest Grand Hotel Melbourne (fairly close)
This is my top tip if you want to stay in the real heart of Melbourne. You could walk to St. Kilda, although this takes over an hour. With public transport in less than 30 minutes Google Maps.  Friends spent here an entire week. They told me the location can't be beaten! The accommodation is amazing, the staff accommodating and comfortable, spotless rooms. You can walk almost everywhere from here! It is Heritage listed and was formerly the Victorian Railways Administrative Office built-in 1893. In 1997 after a total renovation it was transformed into the impressive 5-star Grand Hotel and Grand Central Apartments.

My Top Tip for Melbourne Surroundings Don't miss out on the fascinating flying foxes at Yarra Bend.

St. Kilda breakwater became a Fairy Penguin colony in the 1970s. The rock breakwater was built for the Olympic Games in 1956. Now it is home to roughly 1.400 penguins, and the wild colony is still growing.

Most of the St. Kilda pier is fenced to protect the penguins; only a small part is accessible. Unfortunately, in March 2016, some were brutally attacked and left dead by young people. Please, stay on the wooden platform and keep a distance from them. Volunteers and rangers are at St. Kilda each night to protect the penguins and to answer all visitor questions. Earthcare of St Kilda was formed as a group of volunteers to protect this unique penguin colony. It would be a tremendous help to donate to the upkeep of the penguin team of St Kilda. The donation pole is on the left-hand side of the pier. It's opposite the far end of the kiosk. Due to the repeated disturbance of the little penguins, the public viewing area is fenced since July 2017. You are still able to watch them, but please don't touch them, don't' try to put your camera into a burrow. Please let these penguins live in their natural habitat. If they get always disturbed, they will disappear one day.

I took all these pictures. I travelled to Melbourne and wrote this detailed guide for you. So, please if you wish to use any of my photos contact me! If you use any of my pictures without my permission it is picture theft!

I came to St.Kilda mid-September. Unfortunately, there were just two penguins hiding. It was cold and a little rainy that day. 162 km
Koalas Along the Great Ocean Road
A koala bear sighting at Cape Otway is almost guaranteed if you stay here. If… 168 km
Cape Otway Lighthouse
Our campground was nearby and even after 6 and 7 p.m. we saw several people… 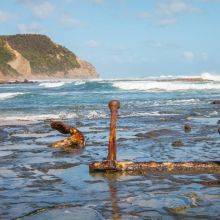 182 km
Wreck Beach - Top Detour at the Great Ocean Road
It's a gravel road to the parking lot, but it is accessible by 2 WD with…