The Gannet Colony at Muriwai - 11 Facts

The gannets start nesting in August and stay latest until April, when the chicks are fledging. Muriwai is one of only three mainland gannet colonies. This bird sanctuary is easily accessible, and you get relatively close to the birds, which make Muriwai unique. More than a thousand pairs of gannets nest at Muriwai each year.

The best time to spot gannets in abundance is from November to March during the main tourist season. The colony is entrance free and always open to the public.

Getting to Muriwai is easy: It's just a 40-minute drive from Auckland to Muriwai. From the car park leads a short walking track to the main gannet colony and a viewing platform. 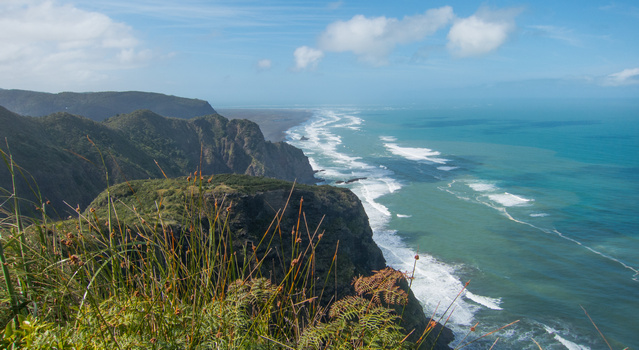 From Auckland: The gannet colony was a must-do for us! When staying in Auckland, I recommend this tour where the gannets are included: Wild West Coast and Black Sand Beaches Tour from Auckland. These guys are amazing and so knowledgeable! You visit Muriwai Beach with its gannets as well as a brewery. This tour is powered by GetYourGuide. The handling is easy; you get an online voucher, a reminder for the tour, and most convincing the 24 hours cancellation policy.

The summer is the peak season.  From December to March, weekends are more crowded due to beach visitors and surfers. There is limited parking! Therefore, visit the colony either early in the morning or late afternoon if you visit on weekends. Mid-week and spring are less busy. It's also usually more crowded on sunny days. On the other hand, there are very few visitors during cold, rough days.

The warmest months are in the summer, from December until March, often with pleasant temperatures around 20 °C in the daytime and 10-12°C at night. The coldest months are in the winter, from June to August, but it's not freezing. Most precipitation occurs in winter, but it already starts in May, with its peak in July. The driest months are from November to February/March.

The best months for swimming at Muriwai Beach are January until March, but the sea temperature is still below 20 °C. Be prepared for the windswept coastline and bring a warm jacket. If you are downwind, you experience the penetrating smell of gannet poo. I suggest staying north of Auckland for a couple of days. We spent three nights close to the famous Piha and Karekare Beaches, well known for the movie "The Piano".  We had a lovely stay at the Piha Beach Stay with low budget and luxury rooms within walking distance to the famous beach. That was amazing!  Check my article here: Piha & Karekare Beach

There are also wonderful accommodations just nearby Muriwai: Hotels - Muriwai Beach. For Auckland, you'll find plenty of options. However, I always book my accommodation for cities and in the peak season in advance Auckland Hotels.

The gannets are common in New Zealand. Most of the gannets occur on the Northern Island, with the biggest colony on Cape Kidnappers. Muriwai is one of the very view spots for watching the blue-eyed gannets close. You may also spot seals, dolphins or even penguins in the sea. There isn't any entrance fee requested. Parking gets a little busy in the summer months from December to February.

POSSIBLE CLOSURES: Unfortunately, parts of the Waitakere Ranges got closed due to the Kauri Dieback disease already in May 2018. Check out which trails in the Waitakere Ranges are open and which ones are closed. PDF Hiking Trails Waitakere More information about the disease, and the status of closures for hikes and campgrounds can be found here. If coming from Auckland, you may drive through the Waitakere Ranges.

I've visited the colony in September. The weather was not so good; so I needed two trips. During my visit, the local surf contest took place in the bay. 14 km
Fairy Falls at Waitakere Ranges
First of all, if you like to hike to the falls, don't leave any valuables in… 14 km
Piha Beach and Karekare Beach and Falls North of Auckland
Piha Beach is a popular surf beach on the rugged coastline close to Auckland.… 106 km
Walk to the Hidden New Chums Beach in Coromandel
This secluded world-class beach, voted one of the top 20 in the world, is not… 277 km
Tongariro Crossing Season Guide and Tips
Tongariro is the oldest National Park in New Zealand, declared in 1887, and its… 469 km
Abel Tasman Coastal Track and Beaches
The famous National Park was established in 1942. Abel Tasman is a hiker's…