The Point Lobos State Natural Reserve is one of the most popular parks because of its natural beauty and location. With more than one million visitors annually, the park already reached its limit, and the number of visitors is still increasing.

The park opens throughout the year at 8 a.m. but closes before sunset to protect the wildlife and to avoid disturbance  (like deer, foxes, bobcats, and owls). Camping is not permitted.

The best time to visit Point Lobos regarding crowds and weather with clearer skies, pleasant temperatures are September and October, followed by April and May. This magnificent and popular State Reserve is located close to Carmel on HW 1. Point Lobos is a year-round destination and super busy during summer and especially at weekends. Limited parking within the reserve; 150 cars only. At weekends and especially Sundays during summer it’s advisable to arrive before 9 a.m. or later in the afternoon. Otherwise, you have to line up or park your car outside on the shoulder and walk-in.

If possible, visit the reserve mid-week. However, Point Lobos is also much loved by school classes due to the many opportunities to experience and learn about nature and wildlife. The foundation supports schools with transportation and offers adventure programmes for 8 to 12 years old youth in summer, which fills up soon. Nevertheless, it was super busy during our visit on a Sunday, but as soon as we started to hike, we were almost alone on the trails. It’s a moderate cool coastal climate. The average temperature ranges from about 55 to 65°F / 13-18 °C year-round.  Spring is sunny and cool before the foggy summer season starts with fog until the afternoon. Fog banks emerge from the cold water (around 50 °F / 10°C), and the warm coastal air condenses into fog.

Fall (September to November) is the sunniest time of the year, although evenings are more chilly. During the winter, mist and showers occur between November to March.

A permit is required, and reservations can be made up two months in advance. 15 diving teams always two divers are allowed to dive at Whalers Cove and Bluefish Cove each day. It must be beautiful underwater in 70 foot-high kelp forests. Some caves are accessible in calm seas. Diving map of Point Lobos State Reserve

Parking and Shuttle in the Future

Limited parking at Point Lobos; just 150 spaces are available. The parking fills up quickly in the morning after opening. The only alternative is outside the reserve shoulder parking along Highway 1. It is not safe for visitors walking here to get to the entrance. There is an additional parking lot planned for 100 cars three miles north of Point Lobos. This additional parking will be near the mouth of Carmel Valley also restrooms are planned. However, I experienced a weekend at Point Lobos. It was crazy, and I think even 100 additional parking spaces won't be enough for the huge amount of day-trippers.

Very clean restrooms with soap and towels next to the main parking lot.

Unfortunately, there isn't any campground or accommodation offered inside the reserve. However, there are many lovely hotels nearby in Carmel or Monterey.

My Top Tip to Beat the Crowds My most favourite park is Garrapata State Park, just a ten minutes drive - 5 miles south of Point Lobos. This park is as beautiful, with 19 stops along HW 1. Visitors are spread in the long stretched coastal and inland park, and it rarely gets crowded. You easily get a parking space.

Wonderful Tours in the Area I have to confess Point Lobos is a breathtaking place in California. The outstanding work of the foundation and its volunteers make this State Reserve even more popular. We got provided with lots of information and tips from the volunteers, even where to spot a whale during our visit. It is very rare to experience such attentive and kind volunteers as we did at Point Lobos. It's a place that should not be missed on your visit along HW 1. The three most beautiful beaches are situated in the south of Point Lobos. There is direct access on short trails. Swimming is not prohibited but keep in mind there are seals, sea lions, and the cold sea temp below 60°F - 16°C It rarely climbs above 60°F it only occurs in August and September.

Where Does the Name Come From?

Spanish is widely spoken in the Bay Area, and Point Lobos means; “Punta de Los Lobos Marinos – Point of the Sea Wolves". The early Spanish Seafarers got reminded of wolves due to the barking noise of the sea lions. If hiking close to the rocks full of sea lions, you utterly understand why this name was given to this place.

The Whaling Station Museum is rich in history with an exhibition about the different occupants in the last centuries. First of all were the indigenous people, followed by Chinese fishermen and Japanese Abalone Fishermen, and for a short time, the Portuguese Whalers came here. You may even get the impression that you’ve seen the house or area before because it is famous for 50 movies like Hitchcock’s Rebecca, Blind Date with Bruce Willis or Turner, and Hooch with Tom Hanks. The museum is one of the Chinese fishermen houses built in the 1850s. Portuguese whalers were attracted by the annual grey whale migration in 1862, but already in 1880, the oil of the whales was substituted by the cheaper kerosene. The abalone fishery began in 1898. During WW II, the area was the headquarter of the US Army. In 1960 the waters at Point Lobos were declared as a marine reserve. In 2007 Point Lobos became utterly protected. The hiking trails are relatively easy and well-marked. Most of them are short below one-mile distance. To get an idea of the whole beauty of this park, hike the 6.7 miles - 10.8 km loop, which starts at Whalers Cove. The first part is the "North Shore Trail"  leading along the rugged coastline to "Cypress Groove Trail" and "Sea Lion Point Trail" which enters the short "Sand Hill Trail" and to the longer "South Shore Trail" until China Cove. The landscape along the coastal track is stunning before heading back inland. However, you can start this trail from every parking. The highest point in the park is the Big Dome at 260 feet / almost 80 meters.  It is a wonderful park to spend the entire day in. The Rocky Point Restaurant is located nine miles south of Point Lobos along the Cabrillo Hwy. We went here several times for the excellent seafood dishes. It has an incredible location with outstanding views to the ocean indoors and outdoors. The entire property is wonderfully located. Dogs are welcome. Google Maps Location

Poison oak is found throughout the park, often a groundcover and thick bush; therefore, stay on the trails. The oily substance on the leaves, stems, and roots is irritating to the skin, which gets itchy for days. I know what I am talking about the reason I have to mention it.

Dogs are not permitted in the entire State Park Reserve to protect the wildlife. 27 km
The Endless Beach at Andrew Molera State Park
The beach is absolutely stunning, full of driftwood and a huge playground for… 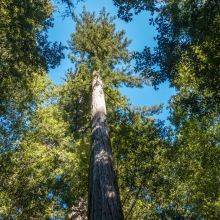 78 km
Big Basin Redwoods State Park - All You Need to Know
Big Basin is California’s oldest State Park, established in 1902. It was… 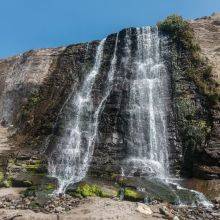 249 km
Yosemite Waterfalls and Hikes
End of summer the waterfall is a trickle only, and the park is completely… 368 km
Channel Islands National Park
These are exceptional islands, isolated over thousands of years and part of the…