Summer months and dry weather are the best conditions to get about 150 meters deep inside the cave. Of course, you can get deeper into the cave, but it's highly recommended to do with a guide. Check the weather forecast first, if severe weather is predicted don't enter the cave. At the end of July 2019 two men; a guide and his client got trapped in the cave. The water level became too high for leaving. A rescue team of 90 people got them out alive. So please, the Falkenstein Cave is not accessible during winter, when heavy rainfall is predicted and, after rains. Best book a guided tour if you want to walk deeper than 150 m into Falkenstein Cave.

After rainfall and in winter the water level is too high for the sinkhole, and the river is flowing out of the cave. If the river flow is too strong and high, even the trail gets flooded sometimes damaged. None of these caves shouldn't be entered from October to mid-April. First for safety reasons and second the caves are home for protected bats in the colder season.

The Falkenstein Cave is located in the Swabian Alps, close to Bad Urach and south of Grabenstetten. From the car park, it is a short walk to the entrance. It is an active cave that means a river is flowing through. The source of the Elsach river is rising in this cave and disappearing into a sinkhole.

In summer it is possible to walk inside of the cave almost dry for 150 meters with rubber boots and neoprene socks, minimum two flashlights. Hereafter the water level is chest-deep for the first time, and the temperature is around 7 degrees. The cave is spectacular but without a wetsuit, you can't go a little deeper into the cave. However, I only recommend entering the cave guided.

The cave is several kilometers long and only for experienced cavers and guided accessible!!!

Guided tours are offered from mid-April until late September depending on the water level inside of the cave. Early booking is advisable. We tried to book it just a week before, but the tours were already fully booked.

We visited these cave on a weekend. It wasn't too busy. There were several groups of cavers with wetsuits getting ready to explore. The trail to the cave is short and well marked. Parking is free. However, it is worth seeing if you're in the area exploring.

More information about the cave

The Swabian Alps are famous for their caves, more information about the different caves. 7 km
Urach Waterfall
The waterfall is nestled in a beautiful landscape in Bad Urach. It is a popular… 141 km
9 Things to Do Around Neuschwanstein for Hikers, Families, and Kids
My nine tips are for outdoor enthusiasts, for hikers, but also for families,… 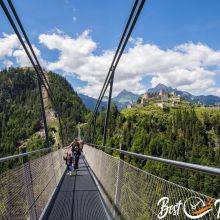 150 km
Ultimate Guide for Highline 179 in Austria, Tyrol
Highline 179 was inaugurated in November 2014 and became the longest Tibet-…

163 km
Viktualienmarkt – Food and Stall Guide for the Victuals Market in Munich
The open-air farmers market has a more than 200 years old tradition; initially… 163 km
Explore Munich by Bike – 17 Must Visit Sights – From English Garden to Isartor
I have been living near Munich for three years already, and I like to show you… 205 km
Climbing the Fürenwand in Engelberg
Fürenwand is very demanding. The via ferrata has a difficulty of D-E. It lasts…